This tour is offered for Independent Touring - Depart Any Day ›
Please contact us regarding other Escorted Tours that may be of interest.

Along the shores of the Mediterranean - Literally the Sea in the middle of the world - most of the great civilizations of the West flourished. On this tour we meet many of them - Greek, Roman, Byzantine, Renaissance - as well as regions and cities of outstanding beauty - Dubrovnik, Italy’s Cinque Terre and Provence.

Your tour commences today at your city hotel. There is an optional pre-tour visit to Gallipoli and Troy. [D] 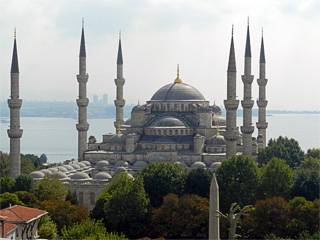 City sightseeing includes visits to a number of Byzantine and Ottoman treasures: the Hippodrome Square, Hagia Sophia, the Blue Mosque, and the Topkapi Palace. [B]

A free day in Istanbul: perhaps the Golden Bazaar for that last minute bargain. There is no daytime train from Istanbul to Greece, so you take the sleeper train. [B]

The purists consider the Greek to have been the greatest of all the Mediterranean civilizations. You arrive in Athens by midday and spend the afternoon putting this ancient city in context - the highlight, of course, is the Acropolis with the Parthenon. [B] [D]

The most important spiritual centre in Ancient Greece - the navel of the world, home of the oracle, and shrine to the god Apollo - was Delphi, now a UNESCO World Heritage site. You explore it today on a full day’s visit. Home to your Athens hotel tonight. [B]

Today you visit the ancient city of Mycenae home to the kingdom of mythical Agamemnon. You visit the tomb of Agamemnon, the Palace and the Lionesses Gate. You move on then to the world heritage listed city of Epidaurus, birthplace of Apollo’s son Asklepios, the healer, and the site of one of the best preserved classical Greek theatres buildings, still with near-perfect acoustics. [B]

There is no train to your next jewel of the Mediterrranean (Adriatic to be precise) - Dubrovnik, so you must fly. On arrival in your city centre hotel, you stroll about the old town of this ancient port city. [B] [D]

A day’s sightseeing in this truly unique city Dubrovnik, rich in Byzantine and Venetian history - the 10th century city walls, the Pile Gate, the Fort of St John. Then wander the gleaming marble streets with their baroque buildings and sculpted Renaissance fountains. [B]

Croatia’s off shore islands have been popular beauty spots since the time of Pliny the Elder in the First century. You spend today exploring these islands. [B]

Nor is there a train out of Dubrovnik, so you fly on today to another jewel of the Mediterranean, the City of Canals, Venice. Your 4 star hotel overlooks the Grand Canal. Settle in and watch the lights come on as the waterbuses chug past. [B] [D]

This morning you begin to explore the art and history of Venice. Byzantine St Mark’s is considered by many to be the most beautiful church in the world and the historic Doge’s Palace and its Bridge of Sighs are “must sees”. Venice is best taken slowly, wandering along her canals and bridges. [B]

There is time for a visit to an outer island - Burano for exquisite lace, Murano for world-famous Venetian glass. Art lovers will want to see the Tintoretto paintings in the Scuola di San Rocco, the Titian in the Friary Church, and the collection of Venetian Renaissance art in the Accademia Gallery. [B]

You join Italy’s flagship Eurostar Italia train today and cross the Italy from the eastern shore to the Western. You break your journey in Milan to gaze upon one of Western civilization’s masterpieces, Leonardo da Vinci’s “Last Supper”. You arrive in your seafront hotel in Portofino. [B] [D]

Today you ramble in the beautiful Cinque Terre, with an opportunity for the sprightly to walk the 5 villages, while others may chose a dip in the Mediterranean or a ridiculously long lunch in a seafront restaurant. [B]

The Mediterranean was birthplace not just of the Old World, but also of the New World. Nearby Genoa was Christopher Columbus’ birthplace, and you have the opportunity to visit it today or, alternatively, a leisurely day in your seafront hotel. [B]

By local train today along the Italian and French Riverias to the jewel of Provence, Avignon, home to the Popes for 70 years in the late Middle Ages. Excursions are offered each day into rural Provence - lavender, cicadas and stone farmhouses. [B] [D]

Off the beaten track today as you drive through some of Provence“s favourite villages, - Lourmarin, hilltop Bonnieux, rainbow-coloured Roussillon, Gordes, and L“Isle-Sur-la-Sourge with its water-wheels, France's second largest antiques centre - with stops for coffee, lunch and shopping. [B]

The Romans were in Provence and left many magnificent monuments to their civilization: today you visit the arena in Arles and the Pont du Gard (with a gesture to 19th century van Gogh). Your last night in Provence tonight. [B]

Our International train skirts the Mediterranean across the border to Spain’s second largest city, Barcelona, the capital of Catalonia. It was founded by the Romans. [B]

This morning’s sightseeing begins with visits to the Mirador de Colon and the Placa Reial and winds up at Antoni Gaudí’s unfinished masterpiece, La Sagrada Família cathedral. [B]

Barcelona lends itself to aimless wandering, and La Rambla ranks with Paris’ Champs Elysees as the best place in Europe to do it. Later, take the funicular to the top of Montjuïc for a fine view of Barcelona and its harbor. [B] [D]

The tour ends after breakfast.

Drive along the Marmara Sea to Gallipoli’s World War I sites. Visit Lone Pine Cemetery which was built in honour of 4228 Australian and 708 New Zealand soldiers lost at Gallipoli. Cross the Dardanelles to Asia. Overnight hotel in Canakkale.

Drive to visit the ancient city of Troy where the Trojan Wars (famous from the epic stories of the poet Homer) took place, dating from 3000 BC to 400 AD can be seen. Back to Istanbul.

Including 3 nights accommodation and breakfasts, 1 dinner, transport and sight seeing. Contact us for costing.

The TOUR COST does NOT include:^ Top ^

There are no Optional Excursions offered with this tour.

About the Mediterranean Jewels Tour Tour